“Light the Light of Freedom”. 35th anniversary of martial law in Gdańsk

The Management of the Gdańsk Region of NSZZ “Solidarność” and the Institute of National Remembrance (IPN), Branch in Gdańsk, the City of Gdańsk, “Pokolenie Lechii Gdańsk” Association and the Olivia Business Centre – invite for the celebration of the 35th anniversary of martial law. The main item of this year’s celebration will be the unveiling of a monument to the Victims of the Martial Law, a social action ”Light the Light of Freedom” and a concert by: ”Armia”, “Izrael”, “Bielizna”, “Kryzys”, “Fabryka” (OHS Hall in Gdańsk, ul. ks. Jerzego Popiełuszki 6). 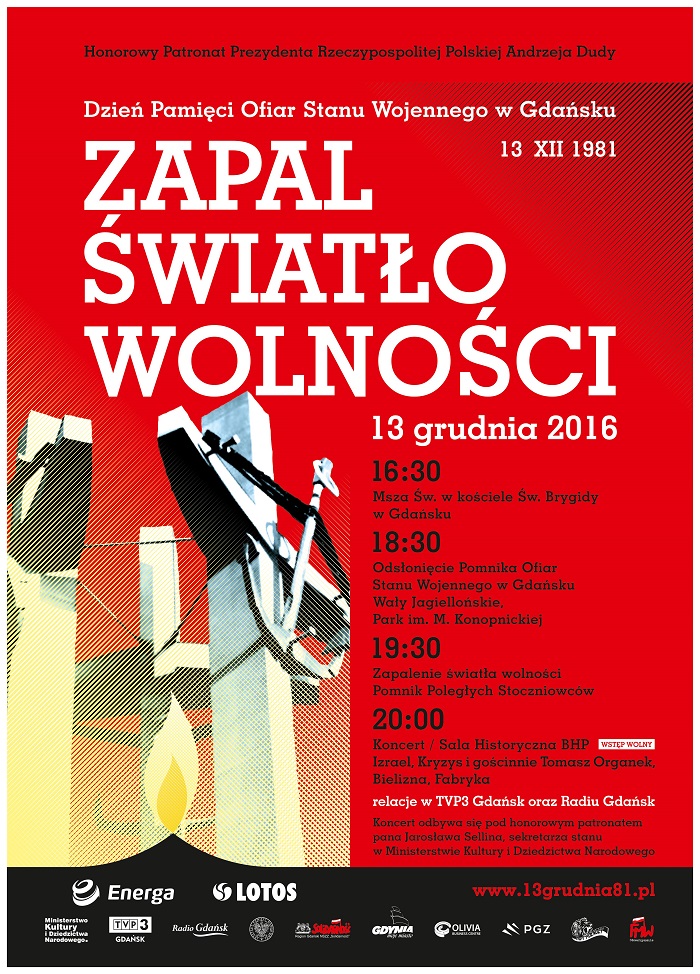 by General Wojciech Jaruzelski – a communication on the establishment of the Military Council of National Salvation (WRON) and implementation of martial law in the whole of Poland. Within a few days, about 5 thousand people were put in detention centres. That was achieved with … 70 thousand soldiers, 30 thousand militia men, 1.7 thousand tanks, 1.9 thousand combat vehicles and 9 thousand other vehicles …

For 586 days the authorities failed to quench the resistance of the society which with time increasingly started to manifest their opposition to the regime. The martial law was formally ended on 22 July 1983. However, in accordance with the prevailing social feeling, it was ended as late as independence was regained in 1989.

The social campaign “Light the Light of Freedom” refers to the solidarity gesture performed by inhabitants of the free world at that time for Poles on Christmas Eve of 1981. To show his solidarity with his fellow countrymen, a candle was lit by Pope John Paul II in a window of the Apostolic Palace in the Vatican. Also, US President Ronald Reagan appealed to place candles in windows who in his Christmas address said:

“Poles have been betrayed by their own government. Those who rule there and their totalitarian allies are afraid of the freedom that Poles love so much. (…) Let the light of millions of candles in US homes be a testimony that the light of freedom may not be quenched”.

The monument will be placed at the probable place of Antoni Browarczyk’s death. It is a board made of bronze, presenting a silhouette of a lying 20-year old man, covered with a “Solidarność” flag. It was made by Gennadij Jerszow.

Antoni Browarczyk (21 October 1961 – 17 December 1981) – an apprentice in an electrical and mechanical plant, a participant in Dominican pastoral work, a supporter of Lechia Gdańsk, a sympathizer  of “Solidarność”. Deadly shot during a demonstration in front of the Provincial Committee of the Polish United Workers’ Party. The demonstration followed the pacification of a strike in the nearby Lenin Shipyard in Gdańsk. He was the youngest victim of martial law.

(OHS Hall in Gdańsk, ul. ks. Jerzego Popiełuszki 6). At the former shipyard site, close to the OHS Hall, a show of reconstruction groups will be presented.

The ceremonies of 13 December are organised by the Management of the Gdańsk Region of NSZZ “Solidarność” and the Institute of National Remembrance (IPN) in Gdańsk. The other organisers: City of Gdańsk, ”Pokolenie Lechii Gdańsk” Association. Sponsors: Energa Group, Lotos S.A. Group, Olivia Business Centre.