Correspondence from discovery of the world during transition

The next guest of the “Star Speaker” cycle – John Borrell, a journalist and businessman from New Zealand, resident in Kaszuby.

As a journalist he has seen the whole world, as a war correspondent he used to meet Ryszard Kapuściński. It is from Kapuściński that he learned about Poland. Now, close to Kartuzy he operates a boarding house and he also set up a local newspaper and a vineyard. The guest of the next edition of the Star Speaker cycle – John Borrell – has a very interesting cv that can be compared to characters in novels by Ernest Hemingway. He has devoted most of his life to his journalist passions: for 25 years he was a war correspondent: he watched the fall of communism in Eastern Europe, he reported on the Round Table negotiations, he was there when the Berlin wall fell. He was the first foreign correspondent who interview Prime Minister Tadeusz Mazowiecki. At the meetings he will present the most interesting stories that he witnessed and reported on to the readers of “Time” and he will tell us about his present activities in the development of local communities and business development – his “Kania Lodge” boarding house in Sytna Góra near Kartuzy.

The Star Speaker cycle is a periodic program of inspiring lectures with international guests, arranged by the Olivia Sky Club in collaboration with the Gdańsk circles of business, science, politics and media. The project is integrated with a cycle of lectures at Gdańsk universities, dedicated to the Tricity student community. The project is aimed at developing and integrating business relations to strengthen the position of Gdańsk in global investment perspective.

John Borrell – journalist and businessman. A New Zealander born in New Plymouth, former war correspondent of “Time” who wrote correspondence on wars in Africa, Middle East and Latin America followed by the fall of communism in Eastern Europe in 1989-1992. For 15 years he has lived in Kaszuby and run the “Kania Lodge” boarding house in Sytna Góra near Kartuzy which – according to “Wine Spectator” has one of the most exceptional restaurant wine lists in the world.” The hotel has its own vineyard that is taken care of personally by John. John also owns Wine Express – the first Polish mail order shop, set up 20 years ago and operating with success today. Additionally, with his older son William, he is a partner in Vestal Vodka manufacturing traditional vodka from potatoes grown in Kaszuby and other regions of Poland. In the UK and in France it has become a cult vodka – it can be found at “Harrods” and at the Claridges and Savoy hotels in London and at the Ritz in Paris. His memories covering over two decades in Poland are titled “The White Lake” with the Polish translation published as “Nad Jeziorem Białym”.

Organisers of the meeting: 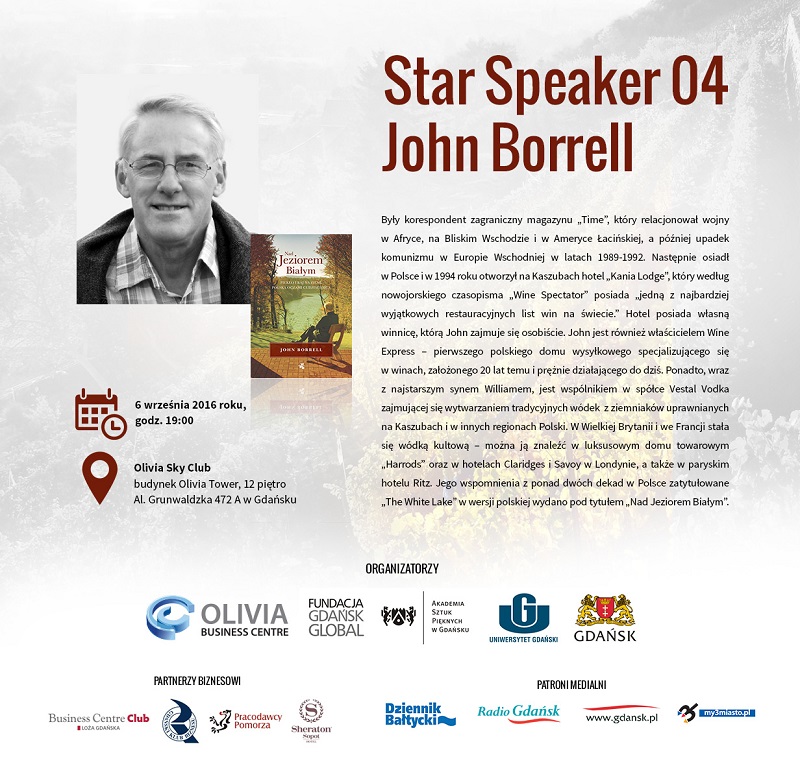